Please note that having Dropbox synchronization turned on does not enable your collaborators to also sync projects to their local Dropbox folders (unless they also have a premium subscription). For premium users who wish to enable collaborators to sync locally, we recommend the Git or GitHub sync options.

Once you click ‘Link to Dropbox’ you will be brought to the Dropbox authorization page where you can sign into with your Dropbox credentials.

After Overleaf Dropbox Sync is set up, you’ll see an Overleaf folder created in your Dropbox Apps folder. Each project will be synchronized with a folder in Dropbox under Apps/Overleaf.

Note: It’s not possible to specify which Dropbox folder you want to sync your Overleaf projects too. Due to a Dropbox limitation, your files will always be synced to the Dropbox Apps/Overleaf folder. 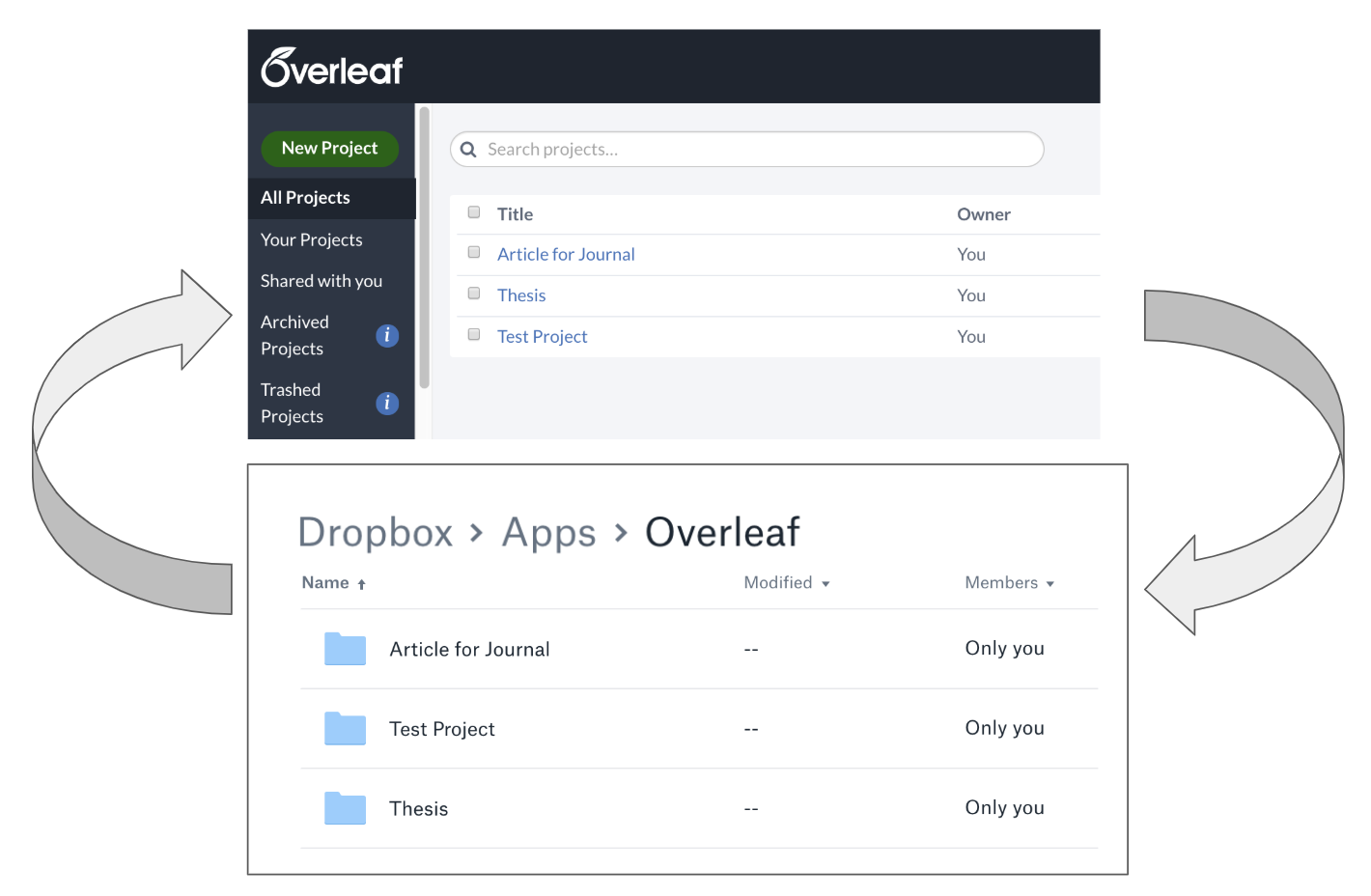 To prevent edits from being applied to the wrong project, we unlink Dropbox if we detect multiple projects with the same name. If you rename your projects to all have unique names, then you'll be able to link to Dropbox again.

What are the Benefits?

This integration results in two-way updates between Dropbox and Overleaf. This means that any changes you make to the contents of these folders can then be synced and reflected in Overleaf. This includes:

Which Overleaf Projects are Synchronized?

All active Overleaf projects that you own or have been granted explicit edit access to will be synced with your Dropbox account.

Archived and Trashed projects in your Overleaf project list will not be actively synced with Dropbox once archived or trashed. But a copy of the files is left in your Dropbox folder since many users use our Dropbox sync feature as a backup of their Overleaf projects.

Projects that will be synchronized with Dropbox:

Projects that will not be synchronized with Dropbox

Please note: once a project is archived, any updates you make in Dropbox will stop syncing to Overleaf. However, if you continue to edit an archived project on Overleaf, those changes may be sent to Dropbox. Specifically, files you change will be sent to your Dropbox again. Archiving a project stops the sync in one direction, Dropbox to Overleaf, but does not stop it in the Overleaf to Dropbox direction.

If a project you expect to sync with Dropbox is not doing so, and it is not covered by the above list of exceptions, please see the troubleshooting section below.

What Should I Know Before Syncing Projects?

Please be aware of certain Dropbox behaviours and their potential impact on your Overleaf projects.

If your Overleaf projects stop synchronizing with Dropbox, please check the following.

If it seems that a project that should be synchronized is not synchronizing, please try unlinking and relinking your Dropbox account in your Overleaf Account Settings. If you continue to have trouble, please contact Overleaf support.

If your Overleaf Account has been unlinked from Dropbox because of duplicate project names, please follow these steps: