Images are essential elements in most of the scientific documents. LaTeX provides several options to handle images and make them look exactly what you need. In this article we explain how to include images in the most common formats, how to shrink, enlarge and rotate them, and how to reference them within your document.

Below is an example on how to import a picture.

Latex can not manage images by itself, so we need to use the graphicx package. To use it, we include the following line in the preamble: \usepackage{graphicx}.

The command \graphicspath{ {./images/} } tells LaTeX that the images are kept in a folder named images under the directory of the main document.

The \includegraphics{universe} command is the one that actually included the image in the document. Here universe is the name of the file containing the image without the extension, then universe.PNG becomes universe. The file name of the image should not contain white spaces nor multiple dots.

The folder path to images

When working on a document which includes several images it's possible to keep those images in one or more separated folders so that your project is more organised.

The command \graphicspath{ {images/} } tells LaTeX to look in the images folder. The path is relative to the current working directory—so, the compiler will look for the file in the same folder as the code where the image is included. The path to the folder is relative by default, if there is no initial directory specified, for instance

as in the introduction.

The path can also be absolute, if the exact location of the file on your system is specified. For example, if you were working on a local LaTeX installation on your own computer:

Notice that this command requires a trailing slash / and that the path is in between double braces.

You can also set multiple paths if the images are saved in more than one folder. For instance, if there are two folders named images1 and images2, use the command

Changing the image size and rotating the picture

If we want to further specify how LaTeX should include our image in the document (length, height, etc), we can pass those settings in the following format: 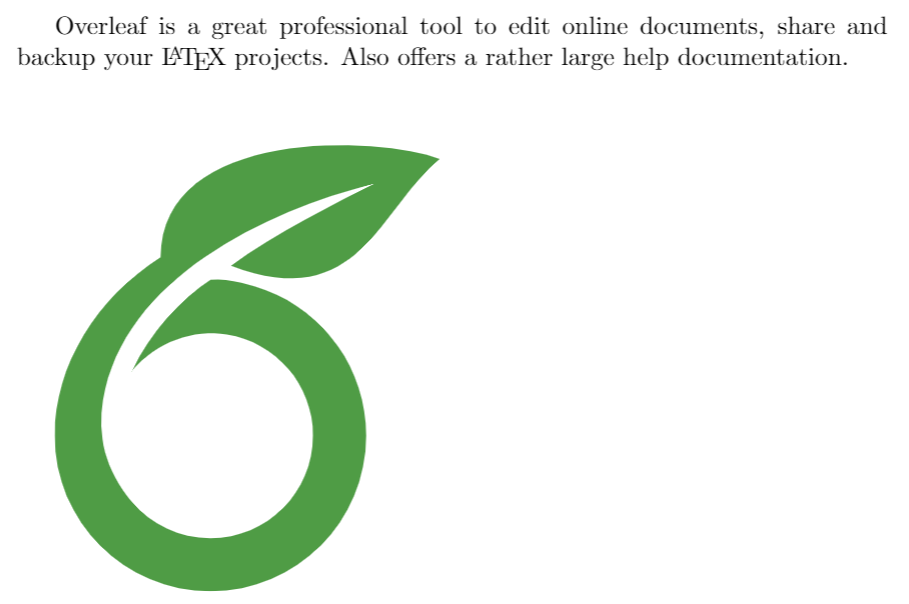 The command \includegraphics[scale=1.5]{overleaf-logo} will include the image overleaf-logo in the document, the extra parameter scale=1.5 will do exactly that, scale the image 1.5 of its real size.

You can also scale the image to a some specific width and height.

As you probably have guessed, the parameters inside the brackets [width=3cm, height=4cm] define the width and the height of the picture. You can use different units for these parameters. If only the width parameter is passed, the height will be scaled to keep the aspect ratio.

The length units can also be relative to some elements in document. If you want, for instance, make a picture the same width as the text: 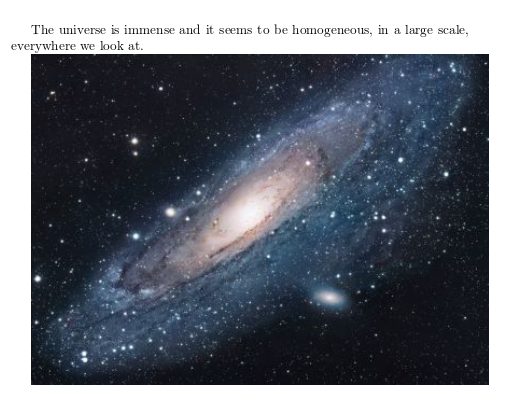 Instead of \textwidth you can use any other default LaTeX length: \columnsep, \linewidth, \textheight, \paperheight, etc. See the reference guide for a further description of these units.

There is another common option when including a picture within your document, to rotate it. This can easily accomplished in LaTeX: 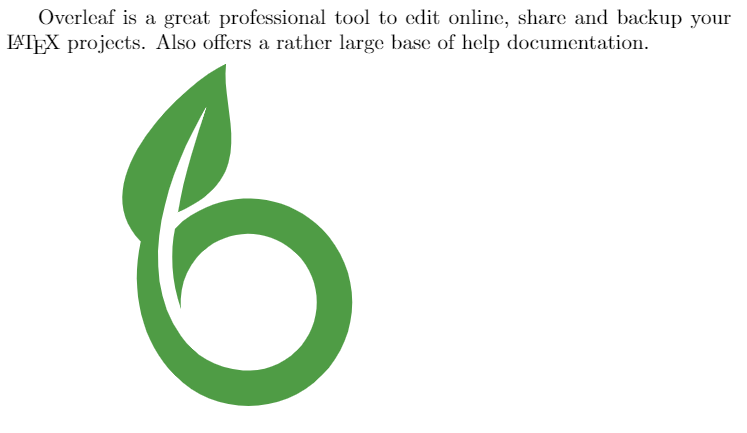 The parameter angle=45 rotates the picture 45 degrees counter-clockwise. To rotate the picture clockwise use a negative number.

In the previous section was explained how to include images in your document, but the combination of text and images may not look as we expected. To change this we need to introduce a new environment. 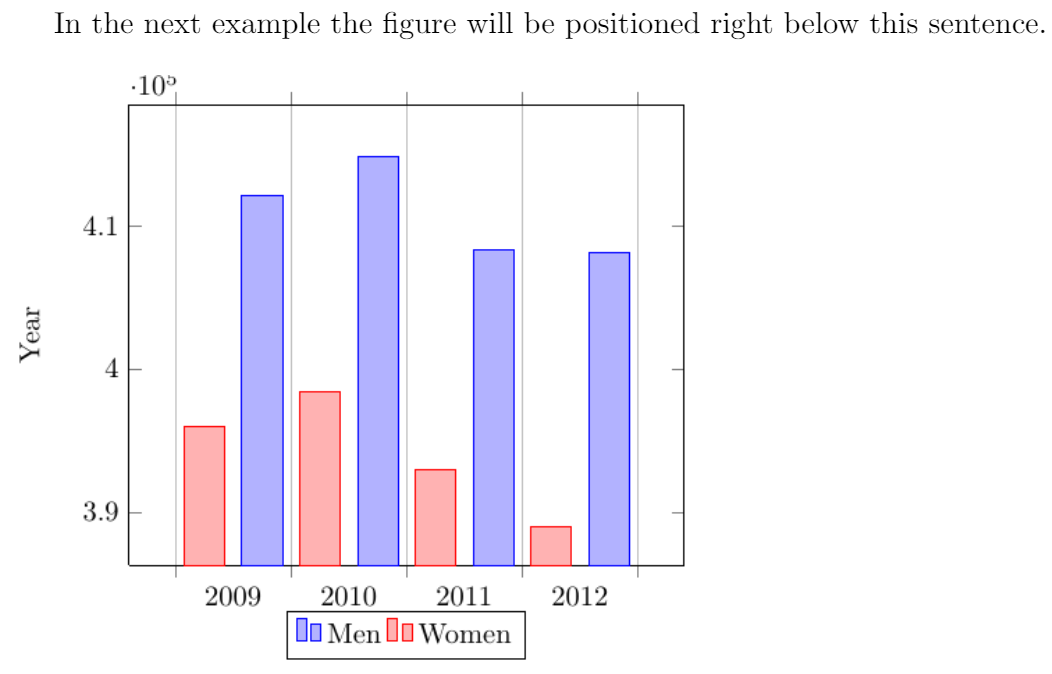 Anyway, sometimes we need to have more control on the way the figures are displayed. An additional parameter can be passed to determine the figure positioning. In the example, begin{figure}[h], the parameter inside the brackets set the position of the figure to here. Below a table to list the possible positioning values.

In the next example you can see a picture at the top of the document, despite being declared below the text. 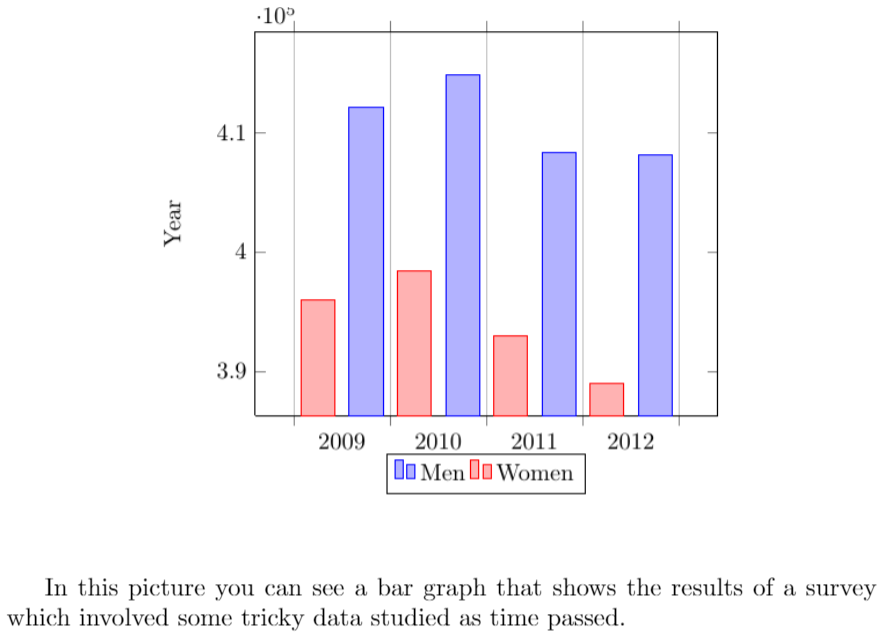 The additional command \centering will centre the picture. The default alignment is left.

It's also possible to wrap the text around a figure. When the document contains small pictures this makes it look better. 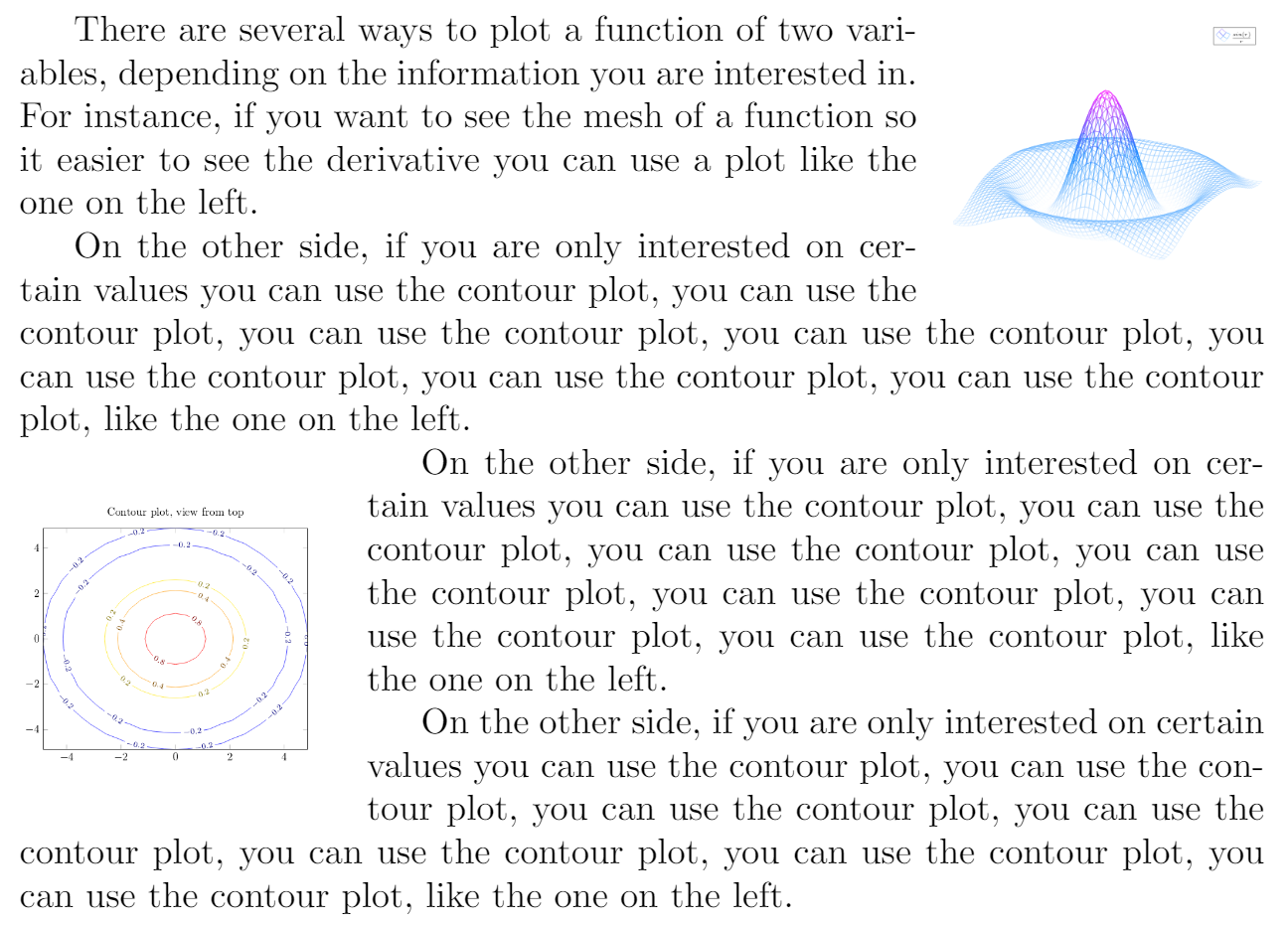 For the commands in the example to work, you have to import the wrapfig package. To use wrapfig, include the following line in the document preamble:

Now you can define the wrapfigure environment by means of the commands \begin{wrapfigure}{l}{0.25\textwidth} \end{wrapfigure}. Notice that the environment has two additional parameters enclosed in braces. Below the code is explained with more detail:

{l}
This defines the alignment of the figure. Set l for left and r for right. Furthermore, if you are using a book or any similar format, use instead o for the outer edge and i for the inner edge of the page.

{0.25\textwidth}
This is the width of figure box. It's not the width of the image itself, that must be set in the \includegraphics command. Notice that the length is relative to the text width, but normal units can also be used (cm, in, mm, etc). See the reference guide for a list of units.

\centering
This was already explained, but in this example the image will be centred by using its container as reference, instead of the whole text.

Captioning images to add a brief description and labelling them for further reference are two important tools when working on a lengthy text.

Let's start with a caption example: 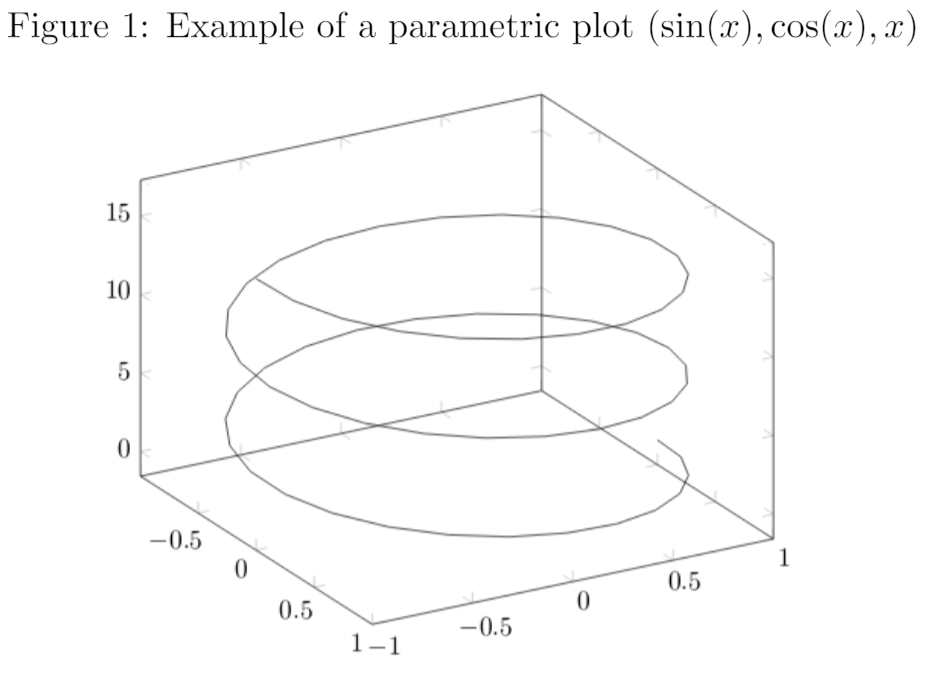 Captions can also be placed right after the figures. The sidecap package uses similar code to the one in the previous example to accomplish this.

There are two new commands

\usepackage[rightcaption]{sidecap}
As you may expect this line will import a package named sidecap, but there is an additional parameter: rightcaption. This parameter establishes the placement of the caption at the right of the picture, you can also use leftcaption. In book-like documents outercaption and innercaption are also available. The names of these are self-descriptive.

\begin{SCfigure}[0.5][h] \end{SCfigure}
Defines an environment similar to figure. The first parameter is the width of the caption relative to the size of the image, as declared in \includegraphics. The second parameter h works exactly as in the figure environment. See the placement section for more information.

You can do a more advanced management of the caption formatting. Check the further reading section for references.

Figures, just as many other elements in a LaTeX document (equations, tables, plots, etc) can be referenced within the text. This is very easy, just add a \label to the figure or SCfigure environment, then later use that label to refer the picture.

There are three commands that generate cross-references in this example.

\label{fig:mesh1}
This will set a label for this figure. Since labels can be used in several types of elements within the document, it's a good practice to use a prefix, such as fig: in the example.

\ref{fig:mesh1}
This command will insert the number assigned to the figure. It's automatically generated and will be updated if insert some other figure before the referenced one.

\pageref{fig:mesh1}
This prints out the page number where the referenced image appears.

The \caption is mandatory to reference a figure.

Another great characteristic in a LaTeX document is the ability to automatically generate a list of figures. This is straightforward.

This command only works on captioned figures, since it uses the caption in the table. The example above lists the images in this article.

Important Note: When using cross-references your LaTeX project must be compiled twice, otherwise the references, the page references and the table of figures won't work—Overleaf takes care of that for you.

So far while specifying the image file name in the \includegraphics command we have omitted file extensions. However, that is not necessary, though it is often useful. If the file extension is omitted, LaTeX will search for any supported image format in that directory, and will search for various extensions in the default order (which can be modified).

This is useful in switching between development and production environments. In a development environment (when the article/report/book is still in progress), it is desirable to use low-resolution versions of images (typically in .png format) for fast compilation of the preview. In the production environment (when the final version of the article/report/book is produced), it is desirable to include the high-resolution version of the images.

This is accomplished by

Thus, if we have two versions of an image, venndiagram.pdf (high-resolution) and venndiagram.png (low-resolution), then we can include the following line in the preamble to use the .png version while developing the report -

Once the report has been developed, to use the high-resolution .pdf version, we can change the line in the preamble specifying the extension search order to

Improving on the technique described in the previous paragraphs, we can also instruct LaTeX to generate low-resolution .png versions of images on the fly while compiling the document if there is a PDF that has not been converted to PNG yet. To achieve that, we can include the following in the preamble after \usepackage{graphicx}

If venndiagram2.pdf exists but not venndiagram2.png, the file venndiagram2-pdf-converted-to.png will be created and loaded in its place. The command convert #1 is responsible for the conversion and additional parameters may be passed between convert and #1. For example - convert -density 100 #1.

There are some important things to have in mind though:

About image types in LaTeX

latex
When compiling with latex, we can only use EPS images, which is a vector format.

pdflatex
If we are compiling using "pdflatex" to produce a PDF, then we can use a number of image formats -