Introduction: Objectives of this series

This article series has an ambitious goal: to explain how TeX macros (such as LaTeX commands) actually work—at the most fundamental level, inside the actual TeX engine software. Instead of relying solely on a suite of example macros designed to demonstrate various features, edge cases and behaviours of TeX, we’ll look inside TeX itself to see how and why its macro programming methods work the way they do.

To achieve our aim we need to start by discussing topics that are quite low-level and, initially, these might seem somewhat distant from the task of typesetting your documents. Hopefully, after taking a deeper-dive you’ll come through with a foundation for building a better understanding that will, in the end, save you a lot of time and, perhaps, minimize the frustration levels too.

It is not unduly harsh to describe the TeX programming language as somewhat arcane, because it is—at least by the standards of most mainstream programming languages in use today. As you start your journey to learn more about TeX/LaTeX, particularly if you want to write non-trivial macros, you quickly encounter notions such as category codes, tokens/tokenization and “expansion” of commands or macros. That barrage of concepts is likely to be quite alien, perhaps leaving you feeling bewildered and, at times, possibly slightly frustrated as your pathway to success is not always aided by some of TeX/LaTeX’s near-impenetrable error messages.

So, where do we start? With category codes.

Let’s take a closer look at the source, or input, “language” used to write your TeX file. A .tex file is, ultimately, one long sequence of characters (including line break characters): comprising text destined for typesetting interspersed with \, }, $, [ and all sorts of characters which can appear in a seemingly near-infinite range of combinations. Anyone who does not use TeX/LaTeX might look at a typical .tex file and be forgiven for perceiving it as a rather confusing jumble of characters with little, if any, visible file structure. The LaTeX macro package certainly goes some way to “imposing” some basic structure on a .tex input file. However, between the \begin{document} and \end{document} it’s up to the document author as to what goes in there. If you look at .tex files written using Knuth’s original Plain TeX macro package, you’ll see that document structure is almost completely absent.

So, in general, a TeX input file can appear to be rather unstructured, a seemingly arbitrary mixture of content to be typeset interspersed with instructions (commands) that guide the typesetting of that content. How is it even possible for TeX to make sense of a typical .tex input file: to filter that incoming jumble of characters into actionable instructions for the typesetting engine and content that is to be typeset?

Any human observer, who does not know anything about TeX, might look at a .tex file and recognize certain characters such as $ and know that is the sign for a currency, or see an & and identify it as an ampersand. That observer infers a meaning for each character they see—a meaning based on the role that character plays within human communication. Additionally, they may see characters such as a, e, o and know they are classified as vowels whilst others such as b, c or d are classified as consonants. As humans, we have a sort of in-built lookup table (in our memory) through which we assign a meaning to each character we see—a meaning based on the role that character performs for the languages in which we are able to communicate.

To process a .tex file the TeX software also has to look at every character within your input and it too needs to assign a meaning to each and every character it “sees”. However, TeX is just a software-based machine that deals with processing text—stored as a sequence of integers (character codes) located in an input file. As a machine, TeX has to be programmed with the relevant data which tells it how to determine the meaning of a character it is “looking at” and subsequently what it needs to do with it. How does TeX achieve this?

The following table lists those 16 category codes: what they each signify together with examples of characters typically assigned to each category.

The use of category codes is TeX’s essential mechanism for filtering its incoming stream of characters, making sense of your input to determine:

Initially, you might think that each character’s category code (meaning) is some sort of fixed allocation: unchangeable and permanently baked into the inner foundations of TeX software, but this is not so. As noted, TeX maintains an internal lookup table to store details of which category code is currently assigned to each character—we quite deliberately say currently assigned because the category code for any character (not yet read-in) can be changed by using a primitive (built-in) command called \catcode. This brings considerable flexibility because you can, if you wish, completely change the way that TeX will treat or interpret the meaning of any character subsequently read from the input, offering tremendous scope for sophisticated typesetting applications.

If you are mostly interested in the use of LaTeX to “get the job done”, chances are that you might not have directly encountered category codes except, perhaps, through error messages you may have seen. But rest assured, category codes are a core component of a TeX engine’s operations: enabling LaTeX (and LaTeX packages) to actually do the work of typesetting your document.

When your TeX engine starts up (“bootstraps”) it will use a set of default allocations of characters to category codes but, via the \catcode command, those defaults may be changed by the core LaTeX code (macros) and/or by LaTeX packages you have loaded—or indeed by your own TeX code or macros. However, over time and through tradition/usage, certain characters allocated to particular category codes have become accepted as “standards” and adherence to those standards is certainly desirable if you want your documents to be portable and easily shared with colleagues or other users. For example, the \ character is allocated category code 0 to indicate the start of a TeX/LaTeX command—see the table above.

When TeX reads (scans) the next character from your input file the very first thing it does is to look at its category code, so let’s take a closer look at what happens when TeX reads a typical line of input. 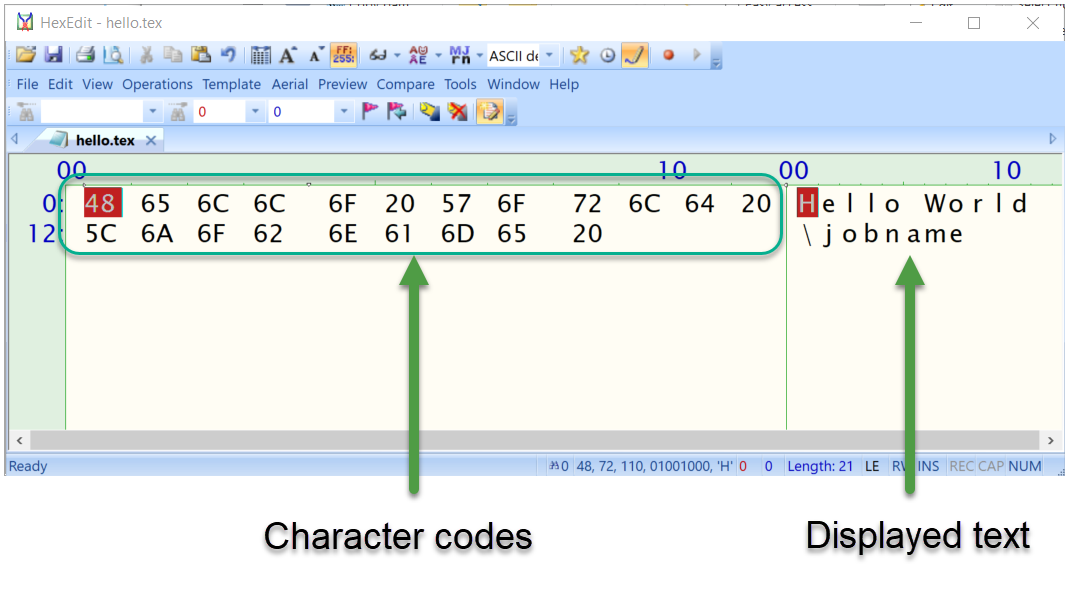 We also know that, to TeX, each character has a corresponding category code; so, based on the table above we know the following default category code allocations are (probably) also being used:

Thus, to TeX, each character in the input file is represented by two numeric values—its character code and its category code:

In part 2 we take a closer look at how TeX reads your input: pretending to be TeX’s “eyes” at it looks at your input, character-by-character.