How to fix this error

This error can be triggered in different ways and, especially for those new to LaTeX, it’s not always immediately obvious why it happened, or, more importantly, how to resolve it. We’ll start with an overview of the general conditions which trigger this error then list some of the more common causes and how to fix them. The latter parts of this article offer more in-depth material for readers wishing to broaden their understanding.

Note: In this article we use the terms “TeX”, “LaTeX” and “TeX engine” but if you aren’t sure of their different meanings you can find out in the Overleaf article What's in a Name: A Guide to the Many Flavours of TeX.

The main causes of Missing $ inserted

There are three main reasons why (La)TeX generates this error:

Examples of errors and their solutions

The following examples demonstrate some ways in which the Missing $ inserted error can be triggered, together with providing solutions to resolve the error.

Symbol commands must be used in math mode

Many math symbols in LaTeX are accessed using commands which must only be used when TeX is typesetting math; i.e., at a time when TeX is in math mode.

Using modifiers, symbol commands—and many other math-related commands—outside of typesetting mathematical content will generate a Missing $ inserted error and force the compiler to enter into math mode.

The following example shows what happens if you try to use the command \alpha \((\alpha)\) outside of math (mode):

Open this error-producing example in Overleaf

The following image shows part of the output produced by the LaTeX code above, demonstrating the error caused by using \alpha outside of math mode:

To use modifiers, or Greek math symbols, within sentences they must always be wrapped in single dollar signs $...$, or LaTeX’s \(...\) syntax, in order for TeX to process them in inline math mode, as shown below.

The Overleaf article List of Greek letters and math symbols provides a list of symbols which are exclusive to math mode, together with links to further useful resources.

Using underscores outside of math mode

A common cause of the Missing $ inserted error is using underscores (_), a math mode character, outside of math mode—such as underscores present in filenames: an example of this is shown below.

Because the underscore character is assigned category code 8 it is reserved for creating subscripts when the TeX engine is in math mode. Consequently, when (La)TeX detects the _ in the file name math_example.tex it does so outside of math mode, which triggers an error and results in erroneous typesetting of subsequent text:

\(\text{Using a math character, such as an underscore, in a file name: math}_example.tex.\)

The _ character (technically its category code of 8) triggers an error and causes TeX to enter math mode: the letter e following immediately after the _ is treated as a character to be typeset as a subscript. Processing then continues in math mode resulting in the italicized text and, additionally, there is no way here for TeX to gracefully exit math mode, which will trigger further errors.

Outside math mode you need to write \_ to use or typeset an underscore, as shown in the corrected version of the example:

You may also encounter this error when trying to typeset URLs with underscores, e.g. https://www.overleaf.com/learn/latex/Subscripts_and_superscripts. Instead of escaping each underscore character, you may want to load the url or hyperref package, and then use the \url command like this:

If such URLs are in your bibliography .bib file, causing errors to be reported from the .bbl file, then make sure you use the url or doi fields to record these fields in the .bib file:

and load the url or hyperref package in your preamble, if necessary. Most bibliography style files will then be able to automatically wrap these values in a \url{...} command.

A number of low-level built-in TeX commands (called primitives) are not permitted in math mode and their use in math mode will trigger the Missing $ inserted error. Although most users are unlikely to use these commands in day-to-day LaTeX code, we make a note here because it’s possible they could be contained within LaTeX commands (macros) being used in math mode.

The following example tries to use the TeX command \vskip inside mathematical material. This is not permitted and generates an error.

Other TeX (primitive) commands not permitted when TeX is in math mode include \par, \hrule, \unvbox, \unvcopy and \valign.

Cause: The blank line between the formulae is converted to a \par command which is not allowed in math mode. You can also see this by writing

To fix this, either delete the blank lines or comment them out:

Some LaTeX environments, such as the align and equation environments, do not require math to be wrapped in $ signs, or use of LaTeX’s math syntax: \(...\) or \[...\]. The LaTeX code which implements those environments takes care of entering and exiting math mode.

The following example shows use of the $ sign inside an amsmath align environment, which triggers a Missing $ inserted error, among many others....

The correct way to write these equations is:

Background to the Missing $ inserted error

The following section is for readers wishing to better understand the reasons behind the error Missing $ inserted. It’s not essential reading but it may assist you with finding and fixing errors.

There are no missing $ signs but I still get the error

In some circumstances the Missing $ inserted error can be very confusing because your LaTeX code might not actually have any problems with visibly missing $ characters. For example, the LaTeX fragment \(\verb|$$y=f(x)\par$$|\) superficially looks correct: the \(\verb|$$|\) pairs are balanced but it will trigger the “missing $” error. Here, it is due to the \par command which is not allowed in math mode:

Open this to see a Missing $ inserted error

The above LaTeX code actually triggers a cascade of errors, as shown below, so clearly you should not use \par inside math!

When the Missing $ inserted error occurs the TeX engine software is trying to recover and “get back on track” so it can continue processing after the point where the error occurred. The section Advanced: An explanation of TeX’s error recovery mechanism will help you understand why this cascade of errors arises due to TeX’s attempts at trying to fix the initial error.

Of modes, and when

Internally, TeX engines are designed operate using three “states of mind”, called modes, which depend on the type of material a TeX engine is currently typesetting. The mode a TeX engine is in at any point during typesetting is called its current mode, which changes throughout the process of typesetting the content of your LaTeX document.

For each of a TeX engine’s modes there are certain commands and characters (or, more correctly, category codes) which are “incompatible” with TeX’s current mode: they shouldn’t be used whilst TeX is in that specific mode. If you try to use those inappropriate characters or commands TeX will issue an error such as Missing $ inserted to tell you something is wrong.

This error Missing $ inserted is related to TeX’s math mode—i.e., the mode a TeX engine is in when you ask LaTeX to typeset some maths.

Just for completeness we’ll note there are two types of math mode, reflecting the creation of inline or display math:

There are multiple ways to trigger a TeX engine to enter and then leave math mode.

The actual text of the message Missing $ inserted is built into (“hardcoded” in) TeX engine software, which is why you will still see Missing $ even if you are not using $ characters to typeset mathematics and use purely LaTeX syntax to markup the math in your document. This can be confusing to new users of LaTeX but there’s little that can be done to change this error message text without modifying the source code of TeX engines!

It’s possible to test if TeX is currently in math mode using the primitive command \ifmmode; that way you can write macros whose behavior can adapt to avoid generating mode-related errors. Here is a very basic example to demonstrate the principle, which prints Yes. or No. depending whether or not TeX is in math mode at the point of “executing” the macro.

The following graphic shows the output produced by the example above: 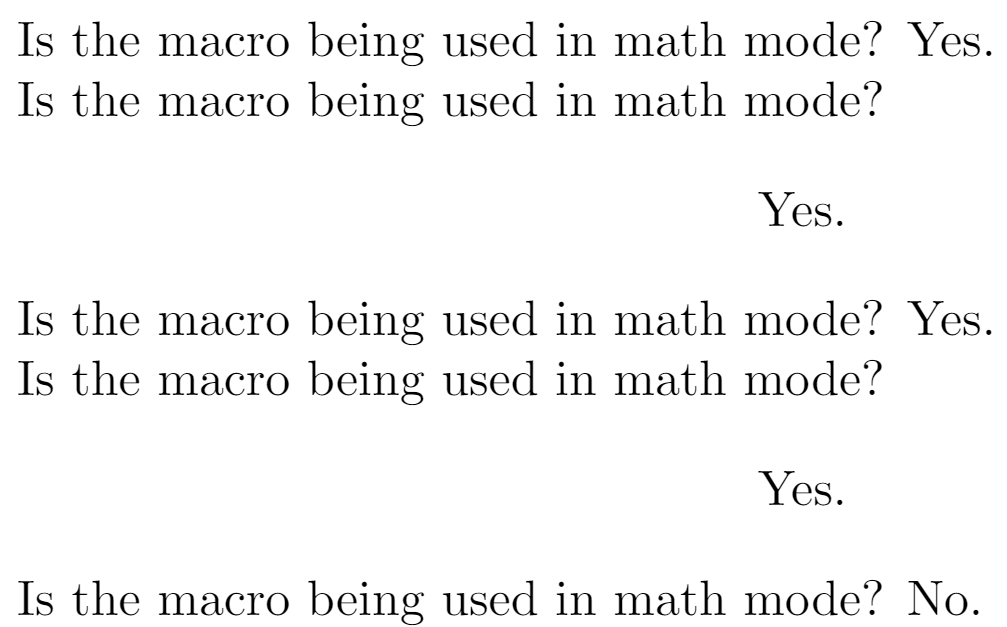 Within the source code of the TeX software, its author (Donald Knuth), makes this observation about the code responsible for generating the Missing $ inserted error:

Here is a list of cases where the user has probably gotten into or out of math mode by mistake. TeX will insert a dollar sign and rescan the current token.

At the heart of the Missing $ inserted error is TeX detecting “something” that should not have been used inside math mode, or “something” expressly designed for math typesetting being used outside math mode.

The task facing TeX is: How do I recover from this? TeX does exactly what Knuth writes: it inserts a dollar sign and rescans the current token—a “token” is TeX’s internal numeric (integer) value which represents the character or command it has just read in. However, due to the precise context of the error, this strategy may, or may not, be successful—as the error text goes on to say “Proceed, with fingers crossed.”!

Let’s explore Knuth’s comments by taking a closer look at the following example: \(\verb|$y=f(x)$$\vskip3pt|\). If you open the code below you’ll see it triggers the error Missing $ inserted.

TeX will insert a dollar sign and rescan the current token.